This isn’t my first rodeo. I’ve been here before, and I will be here again.

I’ve ridden this bull many times; but the problem with bull riding is that inevitably, no matter how tight you hold on, eventually you will get bucked off. When you do, if you’re swift you may be able to crawl away from the line of fire and escape any further damage; but most likely, you’re going to get trampled a few more times before you make it out of the ring.

The other problem with bull riding is that even once you’ve escaped the ring, you’ll likely still have some residual effects of that dramatic exploit. A couple cracked ribs, definitely some bruises, potentially a concussion. You (hopefully) will have survived it; but you walk away knowing that you came treacherously close to not surviving and the whiplash from however long you managed to hold on will ripple out for a while.

Marrying and divorcing an alcoholic feels a lot like bull riding.

It’s dangerous. Risky. Hard to watch. And even harder to do.

I ended my last official ride over two years ago. It wasn’t a smooth dismount and I struggled to escape the ring. The damage from holding onto that bull too long lasted a long time, but over the last couple years, I’ve managed to heal.

In fact, in the last couple months I started to believe I had not only healed but that things were really coming full circle. That I not only survived a satanic bull ride but that the bull was finally retiring his rodeo career and beginning to just live amongst the other free range bulls (or whatever.) I even started to feel like maybe the bull could be trusted. Not for anything major of course, but I thought maybe he’d stopped bucking just enough to make it safe to stand near for a few minutes at a time. But I of all people should know by now not to trust a bull, no matter how calm it looks.

Now here’s the thing. After so many years of nearly losing my soul in the ring, I learned several things over time after finally stepping outside of it.

You don’t just comfortably function around a bull. Ever. Even if the bull isn’t in the rodeo, and even if he seems subdued and cooperative, you don’t turn your back on him and you definitely don’t stand around unarmed. I know at least that much.

This knowledge makes it easier to avoid as much damage when the bull inevitably tries to kick you in the head. But I have to admit, it’s still disappointing when it happens again.

I have been preparing to write about the changes that have come over the last few months and how much of a relief it has been to feel like the rodeo was finally over. I wanted to talk to you all about survival tactics and forgiveness and the beauty of learning to communicate with the animal you once tried to tame but eventually walked away from. I wanted to talk about co-parenting like a boss, even when you thought it was impossible and would never happen.

I wanted to write about what it’s like to finally be at peace with the man who broke your heart and your spirit into a million different pieces, a million different ways; and how amazing it is to see him finally making the changes you thought he’d never make so that he no longer misses everything. I was ready to write about acceptance and the full circle of healing after life with an alcoholic. And I wanted to scream, “It really is possible you guys. Maybe they can’t stay married to you and maybe they can’t be a 24/7 parent; but there can be a level of consistency and trust developed over time. You and your babies can rest and everything is going to be so much better than you thought.”

I’m still going to do that. I still have that message. But today I realized the circle may not look quite as clean as I was beginning to hope.

A rodeo bull no longer in the rodeo is still a bull. His audience may change and the harness may get removed, but he’s still a bull no matter what. 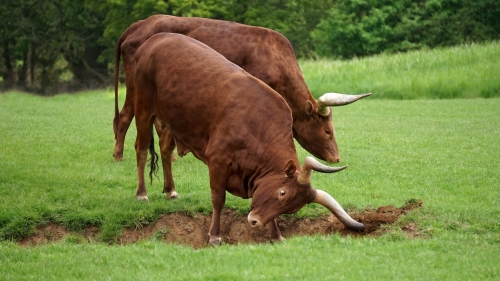 I’ve been out of the ring long enough to heal my broken bones and bruised tissue. I’ve even been away long enough not to hate bulls anymore. I started to almost think I could even trust them a little bit.

I am reminded once again how foolish that is because even if the bull was fully tamed, he’s still full of shit; and eventually, if we get too close, we all step in it.

I’m not angry at myself for trying. I’m not even so much angry at the bull for kicking. Or shitting. I’m angry I ever entered this rodeo in the first place, and that now, no matter how many protective walls I build and how much soft space I create in between it all, I’ll never be able to fully protect my sons from the whiplash of my ride.