Every day I ruin my sons lives in some way or another. It pretty much starts from the time their eyes open in the morning until just a few minutes before their eyes close for the night. There are good moments in between that carry us through, but for the most part, these days you can just call me The Toddler Life Ruiner.

This morning was no different than any other morning, except I went just a touch above my normal call of duty. I’m a high achiever and when I do things, I like to do them to the fullest. So naturally, as The Toddler Life Ruiner, I want to make sure I do my job and do it well.

I first failed by waking up the little cherubs. That’s always the first task of the life ruiner. I mean after all, it’s hard to ruin their lives if they’re asleep. They must have their eyes opened before the real ruining can begin.

Once the eyes are open, you can really start to do some damage by telling them “Good Morning! I love you and it’s time to get ready for school.”

I immediately get an A+ for doing my job well at this point and I’ve only been at it for 3.2 minutes. If this were a paying job, I think I’d deserve a raise.

Next task of The Life Ruiner is to force the toddlers to change their pee soaked pajamas into the clothes they’ve picked out for themselves the night before. I know you discussed it with them before they went to bed and gently explained that A. It’s hot as hell fire and it’s not okay to wear sweat pants, long sleeves and a toboggan to school, and B. They’re going to have to change into real clothes in the morning. I know they agreed and acted like that was a reasonable thing to tell them just 8 hours ago; but remember, these are toddler’s lives you’re ruining. 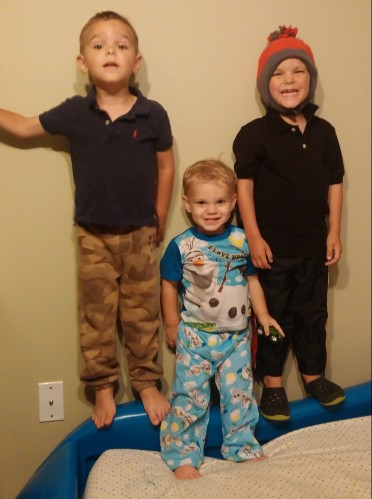 Toddlers are a different type of people. Things get tricky. Stay on your toes and keep your head in the game.

If you have more than one toddler’s life to ruin, you’re going to have to divide and conquer. Even if you’re doing it by yourself. Usually there will be one that acts like you’re not ruining their life, at least for a few minutes at a time. So you may start to get this false idea that you’re failing at your job.

Give it about 4 more minutes and I guarantee you you’ll look at someone wrong, fail to answer their request in a timely manner, get them the exact thing they asked for thinking you were doing the right thing, insist that they cannot stay in a piss and shit filled diaper. Something along those lines. So don’t fret. You’ll get right back on task in a matter of moments.

After you’ve woken everyone up, heinously forced them out of their excrement filled diapers and had the gall to make them wear seasonally appropriate attire, the demands will start. If you really want to do well at The Life Ruiner position, you’re going to need to make sure you only have 2 arms and can only do about 3 things at once.

These people are going to spit fire requests at you. They’re going to need each demand met before the request even falls all the way out of their mouth. You’re going to need to do exactly what they say. I know that sounds backwards.

“I thought I was supposed to be ruining lives?” you’re thinking. You are! This is the way. Do what they ask, how they ask, when they ask. It WILL be wrong as soon as you do it and their life will be ruined! Mission accomplished.

Now, if you have an anxious child on your hands, the mornings will be your best time to ruin his or her life. You won’t even really have to work at it.

Ask them to put their clothes on. Give them a choice of what shoes they can wear. Ever so sweetly hold and comfort them when they kick and scream in your arms like someone set them on fire. Make them wear their seat belt in their car seat. Ask them if they want some milk. Sing songs to them. Talk to them. Try to prepare them for the day. Give them incentives.

Any of these things will ruin their life.

If all that fails (but it won’t), simply lose your cool. Yell at them to stop crying after they’ve been at it for a solid hour and you are at your limit. When you realize that isn’t working for any of you, threaten to make the screaming banshee get out of the van until he stops crying. Follow through with it, because you don’t want to be a parent that makes empty threats. Stand with them on the side of the road (in a safe, neighborhood area by your house); even if you’re running late because of all the life ruining you’ve been doing for the last hour and a half, until they stop crying. When they don’t stop crying, try hugging and talking it out. That’ll really stir things up.

If that didn’t work to stop the madness, which it won’t because it was a ridiculous idea that you came up with when you felt you had no other options, scoop the little guy up and place him back in his car seat. Dodge the flailing arms and legs coming at you like nun chucks and remind him that he has to wear his seat belt.

When the screaming escalates and you can’t take it for one more second, turn the radio up as loud as it goes. Is it hurting your ears? Great! Is it vibrating your van? Perfect. Are your other children confused and slightly scared? Excellent. Crank it up another notch and sing at the top of your lungs to drown out the screams coming from the subject in the back seat. When there’s a break in the song, smile at the non-screaming toddlers and tell them, “We’re praising Jesus!!!”

Hang in there mama. You’re ruining lives like a champ!

When the toddler revolts and takes off his seat belt while you’re on the highway, pull over. Without saying any words, simply buckle him back in. You may have to do this 3 or 4 times. Remember, you may be ruining lives, but you have to also teach the lesson that well, safety first!

If you’re doing things right, at least one child will scream and cry the entire morning until an unknown number of minutes after dropping them off at day care. If you’re a stay at home Life Ruiner, don’t fret. Maybe they’ll scream until nap time. If so, rest assured you’re doing your job well. If they take a break and start acting sweet and happy, don’t get nervous. Pretty soon you’ll get them the wrong cup or you’ll put your hair up or try to change their shirt when they spill some form of food or drink they refused to consume all over themselves.

If I told you all the details of how to ruin a toddler’s life, we’d really be here all day. But, if you happen to have a toddler or two, you likely already have the job title of Life Ruiner. So you know how this goes.

Do almost anything and you will be sure to ruin the lives of these tiny minions you created.

Do you feel every single day that you are ruining the lives of your children? Good. You’re the best damn life ruiner that ever lived right now. Hang in there mama. You’re in good company! Remind yourself every few seconds that you love them more than life and even though it doesn’t feel like it, you will survive these years and so will they. You’re just doing your job.

Head on over to Facebook and don’t miss a single thing of how I’m ruining my sons lives every day! 😍

15 thoughts on “How To Ruin Your Toddler’s Life”