The saying goes, “March comes in like a lion, out like a lamb.” I suppose that’s true if you’re talking about weather. But since I’m not here to talk about the weather, that saying doesn’t completely apply.

Spring and Fall are my favorite seasons. Not too hot, not too cold, beautiful colors, and there’s a sense of calm and peace outside.

St. Patrick’s day is sort of the kick off to Spring. It’s a happy time. A joyful time. A festive time.

But when you love an alcoholic, it’s a stressful time. A dreadful time. An anxiety provoking, heart stopping, soul crushing time.

Every St. Patrick’s day for the last 5 years of my life has been colored by much less pleasant things than green shamrocks and happy leprechauns. For me, this time of year brings with it a sense of eery emtpiness, anxiety and pain.

During our dating years, every weekend was a St. Patrick’s day celebration for my husband. But when the real St. Patrick’s day rolled around, he viewed it as his own personal invitation to get as drunk as humanly possible in the name of his illusionary Irish heritage. He always claimed to be Irish, but when we did some research, we discovered that his bloodline is in fact mostly Spanish, with a little bit of German and a few other European flavors. That was a major blow to his Irish pride, but it didn’t slow him down when it came to partaking in the festivities “dedicated to his family legacy.”

Our first St. Patrick’s day together, I was in grad school in D.C. and he was in Georgia for some military training. I spent the day studying. He spent the day drinking himself into oblivion; calling me so drunk he couldn’t speak, yet managing to pick a fight with me while accusing me of going out; getting into a fist fight with his friend whose jaw he broke; and then almost getting a DUI.

Why in God’s name would you stick around for another St. Patrick’s day, you ask? Great question!

By that first St. Patrick’s day, we’d already been together almost a year (we met right after St. patrick’s day in 2010) and I was on my hell bent mission to rescue this man I loved. My grandpa always said, “Hang in there like a rusty nail,” and boy, was I hanging!

The next St. Patrick’s day was 2012. I was 7 months pregnant with the twins and he’d continued drinking away every weekend of my pregnancy just as he had from the beginning. I was holding on by my finger nails feeling absolutely lost, devastated and trapped in this hellish marriage we’d created together. I was scared to death. It was becoming clear he had no intentions of changing his lifestyle for me or the two children we were about to bring into the world, and I was feeling more alone than ever.

The weekend before St. Patrick’s day, he went out for a typical night of binge drinking and I knew I was at my breaking point. He didn’t come back home til 8 am the next morning as I was leaving for work. That week was hell on earth and by the end of it, we made a decision to spend some time apart. He told me he’d be staying with a friend, and that’s the lie he maintained for 6 days. I later found out that he went to Florida and partied himself into the ground.

In Savannah, St. Patrick’s day is a huge deal! Its one of the biggest, greenest parties in the whole world. It should have been a fun experience to live in the heart of where people travel from all over the world for this one day. But for me, I’d have given anything to be anywhere else. 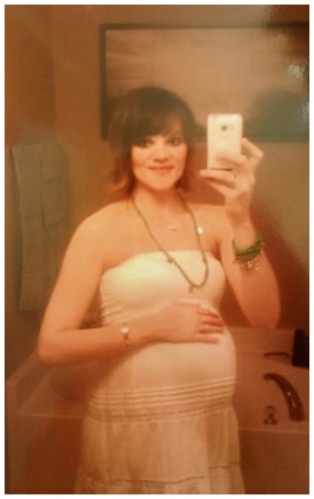 The morning of St. Patrick’s day, I took a long bath and got dressed with my favorite green accessories. I decided to push whatever my husband was doing or not doing out of my mind and go to the parade downtown. I walked I don’t even know how many miles as I prayed that I wouldn’t go into labor from the combo of heat, stress and too much walking; and I willed myself to be ok for that few hours.

Each car that drove by, I peeked out of the corner of my eye to see if my husband would come spilling out of it. Little did I know he wasn’t even in Savannah as he’d said.

That evening, there was a couples small group class at church. Because he’d fed me lies of being willing to do whatever it takes to make things better, in between shots of course, I asked him to meet me at the class. We’d been apart for about 4 days by that point. He promised me he’d come and I was hopeful that maybe we could get things back on track.

As the time for the class drew closer, the anxiety ball in my stomach was starting to crowd my twins out of their comfortable space.

I spruced myself up, said a prayer and headed to church with as much hope as I could muster. I got there a little early and texted my husband that I loved him and was excited to see him as we worked together to mend our broken places.

The anxiety in my gut was starting to move it’s way up into my heart and throat. I felt sick. I paced around the building, smiling at each person that passed by, trying to remain stoic. I peered out the window like an orphan waiting for its new family to arrive.

The minutes ticked by and with each one, I lost another ounce of my soul. Ten minutes after the class had started, still silence, and I knew he wasn’t coming.

I gathered as much pride as I had left, walked into the class with a pained smile, choking back tears, and lied to them about why I was coming to a couples class with no husband. I forced myself to stay in that seat knowing that I had no reason to rush home.

I felt like I didn’t belong anywhere. Everywhere I turned there were painful reminders of the reality I was living in and I was petrified. I spent the evening on the phone with my mom, as I often did, and tried to enjoy the peace and stillness as much as I could while I worked on putting together the nursery for my twins that would be born in 2 short months.

After my husband’s 6 day binge ended, he sauntered home looking like something straight out of the walking dead. The details of that time are too much for a post like this, but let’s just say, it was one of the darkest times of my whole life. It was at that point that I realized I had to do something for my husband or our marriage wouldn’t be the only thing that ended soon.

Follow Three Boys and a Mom on WordPress.com
Join 18,486 other followers