I gave birth to a battery! Really 3 of them, but in honor of the littlest one’s 9 month birthday, this post is just about him.

Meet Lucas! (Aka: Luke, Lukey, Yukey (as his brothers say), and many other sweet nicknames I’ll save for later.) 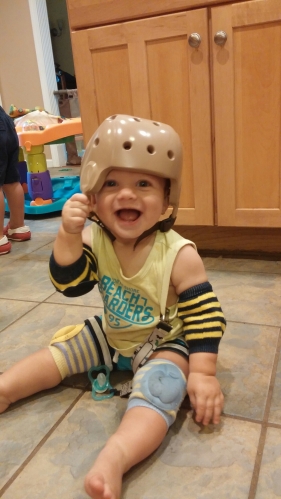 This little 21 pounder is nothing short of an enigma. A beautiful, happy, vibrant enigma.

Although people act like I’ve got a softball team of kids, I only have 3. But of the 3, this little one is unique in a wondrous way. He is unlike any child I’ve ever known, much less raised (in my 2 short years of “raising” anyone.)

All my boys are full of life and energy, but Luke has got THE SPIRIT! 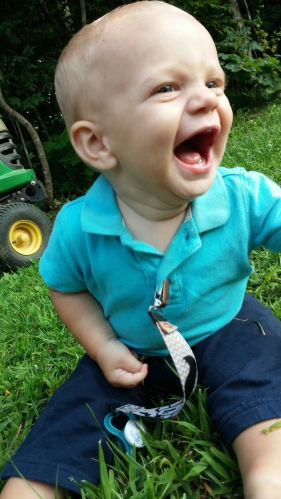 He was extremely active during my pregnancy and I loved feeling his tiny kicks. Now on the other side, those kicks don’t feel so sweet and tiny anymore! This little booger is strong! When he was born, he barely cried and I worried something was wrong with him. For the first few weeks of his life he remained eerily calm. So calm and subdued in fact, that I was distraught over the thought that my precious angel might have my brother’s disease called SMA (which you can learn more about here.) The pregnancy hormones and stresses of life all set in hard and I was a weeping mess in the pediatrician’s office for his after birth follow-up appointment when she said, “How is he doing?” He was doing great; but we had already confirmed that he does have Severe Hemophilia A, another genetic family disease, and I was petrified that we’d have a double whammy.

We did some tests which came back negative, the weeks went by, and this little caterpillar started coming out of his cocoon. But he didn’t just come out…he busted out of that sucker full force like a bat out of hell! I was relieved when colic set in and he started crying for hours each night because at least I knew his lungs were working. Despite the colic, he has been one of the happiest, smiliest babies I’ve ever seen since the beginning. His spirit is big and loud, but it is also sweet and precious! I do have to be honest though, he’s not precious in the traditional sense of that word. 😀

My twins are wild and wooly little boys so in the beginning I often thought, “How am I going to keep Luke safe around these two maniacs?” Well, early on my little Lou-bug started proving he’d be just fine! In fact, now I’m more worried about keeping everyone else safe around Luke! 😉

He came out a healthy 8 pounds 12 ounces and he has stayed healthy and hefty. At 9 months, he’s 21 pounds and about 30 inches long. He is rotund! I’m proud of each squishy little roll because he’s been exclusively breastfed since birth with no end in sight: a daily miracle because he’s so busy its a struggle to keep him still long enough to actually eat! He’s the epitome of fast food! He does now enjoy other foods, but breastmilk is primary! Go boobs!

He was holding his head up within the first month of life, standing when held before 2 months, rolling everywhere by about 4 months, sitting by 5 months, scooting since around 6 months, and now at 9 months, he crawls 100 miles an hour, pulls himself up on things, stands on his own and wrestles with his brothers. He is a beast!

Aside from his physical strength and mad dash toward walking early to keep up with the world around him, he is emotionally strong as well. I can’t remember when it started but at some point he developed a growl. It’s a happy growl, but it’s a full blown growl. A deep, loud groan from his guts! It actually sounds a little evil, but he does it with a happy smile on his face so I’m pretty sure we’re safe. He also has times where his whole body stiffens up, his eyes gets brighter than the sun and he just yells. It’s literally like his spirit is too big for his body. His little body is just not able to contain it and he has times of what can only be explained as baby mania. (I pray this is not a precursor to what’s to come later.)

Luke fights sleep like a baby ninja, and I mean that as literally as it gets. When the sleepy train comes, Luke runs from it as fast as he can, and then when it catches him, he fist fights it. Many nights I feel like I’m wrestling an octopus into submission and I’m quite sure there have been at least a handful of exorcisms that have occurred. I nurse him to sleep and as if it angers him for his eyes to close, he will buck his body backwards, stiffen up like a board, and yell an angry yell like an inmate busting out of jail. I literally wrap my arms around his body, hold him as tight as I can, and papoose him onto my boob until he stops fighting. It’s a sweet little experience!

Changing his diaper is like a boot camp workout, cutting his nails…forget about it, and getting him dressed is like trying to dress a wet noodle on speed. He gallups while you’re holding him; never stops moving, bouncing and now climbing; and goes headstrong with full force into everything he does.

As I mentioned before, he has severe Hemophilia, which long story short, means he has almost no clotting factor in his blood (missing factor 8) and is subject to easy bruising, joint bleeds, muscle bleeds, and other spontaneous internal bleeds for no reason. It’s a very manageable disease (although it can be fatal if not treated and managed appropriately) and I’m not new to it as my younger brother has it as well. Boys will be boys, so any boy with Hemophilia poses a threat to his mother’s sanity tying to keep him safe and bleed free. But my sweet Yukey…he’s a heart attack a day! He maintains at least a handful of bruises on his body at all times and I’m sure people wonder if he’s a tiny abuse victim. Luckily we’ve only had one ER visit so far, and that was just a precautionary measure because mom of the year here let him scoot off the couch! Rest assured, it will not be our last!

This little hemo is into EVERYTHING!!! It’s a full time job just keeping him from climbing into all the worst places, shoving all the things into his mouth, grabbing anything you don’t want him to grab, and escaping your sight like a little Houdini on steroids.

That strength I mentioned earlier? He pinches, bites (thanks teething), and grabs with the strength of a full grown man and I often have to stop and remind myself he’s just a baby. He will swipe at the older boys when they walk by his exersaucer and grab their blanket or shirt and they can’t get loose. They’ll look at me with a disturbed look on their face like, “Mom, help!!!” and say, “Stop it Yukey!!!!” Luke usually laughs and thinks things like that are just hilarious! He’s wild, and although he’s 18 months behind the older guys, he does not let that slow him down!

When people spend some time around him, the words used to describe him are often things like wild, crazy, maniac, demanding, bucking bronco, loud, strong, determined, lunatic, mess, and many more in that family. While I try not to use negative terms like that and prefer saying things like spirited, lively, and energetic, there are times where wild maniac are just the only words that fit. It is also often said, “Its a good thing he’s cute!”

Although this spirited little nugget gives me daily cardiac arrest and keeps me on my toes, I wouldn’t have him any other way. God gave him this strong will and vibrant spirit for a big purpose and I am dedicated to making sure no one ever breaks that spirit in him, (although we may have to tame it just a smidge for his own safety.)

With as much fervor and energy as he does everything, he is equally sweet and wildly angelic. His blue eyes pierce your soul and heaven is inside them. His smile can change your whole day, and his heart is as big and beautiful as his body. He has an amazing personality and is truly just full of life. Although he’s not a fan of sleep and requires surprisingly little of it, when he does, its a sweet and beautiful thing! ☺

Lucas, you bright beautiful soul, I love you so much! These last 9 months have been a wild ride with you and I know we are in for a lifetime of rides, so I’m saddled up and ready to go! You’ve added so much love and life to our family and make sure we never have any dull moments, and for that, we thank you! You are strong willed and stubborn like your mama, but you’re also sensitive and sweet like me too! I can’t believe you’re already 9 months old, but I also can’t believe you’re only 9 months old. What an amazing whirlwind it’s been, but it’s just the beginning! I love you sweet Yukey, ya crazy nut cake! Don’t ever let anyone, me included, tell you you need to change! If they try, just say, “Turn down for What!?” 😀 You’re perfect the way you are! (Although again, we may have to work on some of it as you get older) ☺ I love you punkin chunkin! Happy 9 months!