Well folks, I’m running on fumes. The same sickness that wiped me out a couple weeks ago that I wrote about in Ther-MOM-eter has now moved through every individual who has set foot in this household and landed 2 days ago in one of my twins. It started with Ethan before I got it, then it cycled through every one and is now hopefully ending with Connor.

Two nights ago he spiked close to a 104 fever just before throwing up at midnight and has battled it ever since. We were up last night til 5 am rotating between the bathroom floor and my bed. Then, no sooner than I finally got him settled down and falling asleep, my little guy woke up for his regularly scheduled middle of the night wake up call and boob snuggle fest. For the 3 hours of rest between 5 and 8 am, I shared my bed with one sick 2 year old and one squirmy 8 month old and folks, that bed just isn’t big enough for the 3 of us.

Let’s take a moment to discuss my smallest angel. He’s nothing short of an enigma. He is almost 8 months old and is quite literally one of the most energetic little babies I have ever met. The energizer bunny ain’t got nothing on this guy. He is wild from the time his enormous blue eyes pop open early in the morning til they are forced to close late at night, or even early into the next morning. He has Hemophilia so that adds an extra layer of heart attack to his wildness. He’s crawling and trying to walk at this point so he’s covered in bruises and looks like a tiny abuse victim. None of this is the problem. The problem is that he does not sleep! Ever!

My twins have slept 12 hours through the night plus a nap during the day since 5 months old. Luke is clearly bucking the system and is going full force in another direction. I’ll skip the boring details of his sleep schedule but simply put, he apparently requires a total of 9 hours of sleep a day. The rest of the time, he’s full throttle. And rest assured, if and when he does give in to 15 minutes of sleep, it’s only after an all out war and almost never happens when the other 2 are asleep. There are no breaks. Period.

Now, 9 days out of 10 this doesn’t bother me. I’ve accepted the fact that I’m a mom which has to be short for something like mind over matter (matter being sleep). I’ve also accepted that all children are different and just because my twins are champion sleepers does not guarantee Luke will be. He’s spirited and full of life (just like the other 2), and he just is who he is. I’m more than happy to surrender sleep for my children, but at some point, even Jesus took a nap.

Today, I’m over it. I’m running on 3 hours of interrupted sleep after several days of little sleep and not a single break from anyone. Again, normally I don’t even want a break if I could have it, and if I get one, I instantly miss them all; but for this 5 minutes, I’m over it.

To top things off there’s divorce nonsense flying about and of course, the inevitable dealings with the other half. Again…over it.

The boys have fought over something almost continuously (a balloon, cheese, an apple, what show to watch, etc) resulting in a dual timeout shortly after Ethan finally joined our all night long party,

Connor has been crying/whining/wanting to be held most of the morning in between fighting with his brother, Luke is all over the place and of course fighting sleep like a little baby ninja, I haven’t showered in going on 5 days, and I gave the boys pound cake for lunch so that I wouldn’t feel as bad about having some of it myself. And now, although no one is ready for sleep and Luke is crying non stop, I’m forcing them all to take an early nap because it’s a necessary safety precaution at this point.

I never let Luke cry for longer than a few minutes before rescuing him because as we all know by now, allowing a baby to cry only teaches them that you hate them and are not there for them when they need you; but right now, some sanity has to be found somewhere.

It’s finally quiet and they’re all asleep, and I already feel guilty for being at this rare level of “had it.” But I’m a human. Though I hate to admit it, my super mom cape is apparently out of juice today. There is truly nothing worse than seeing your sweet baby sick or hurting. My reservoir of nurturing patience and my desire to hold all 3 babies in my arms continuously is normally endless, but apparently, it does have an end. I’ve arrived at it today.

Despite my humanness and need for a break, it’s amazing how literally 10 minutes into the silence, I miss them and feel bad for losing my super powers of patience and grace. But sometimes, the pot boils over and it just is what it is.

I snuck into their rooms like a samurai to get these pictures, holding my breath the entire time praying the angels didn’t hear or smell me and decide to open their sweet eyes. It was a success! 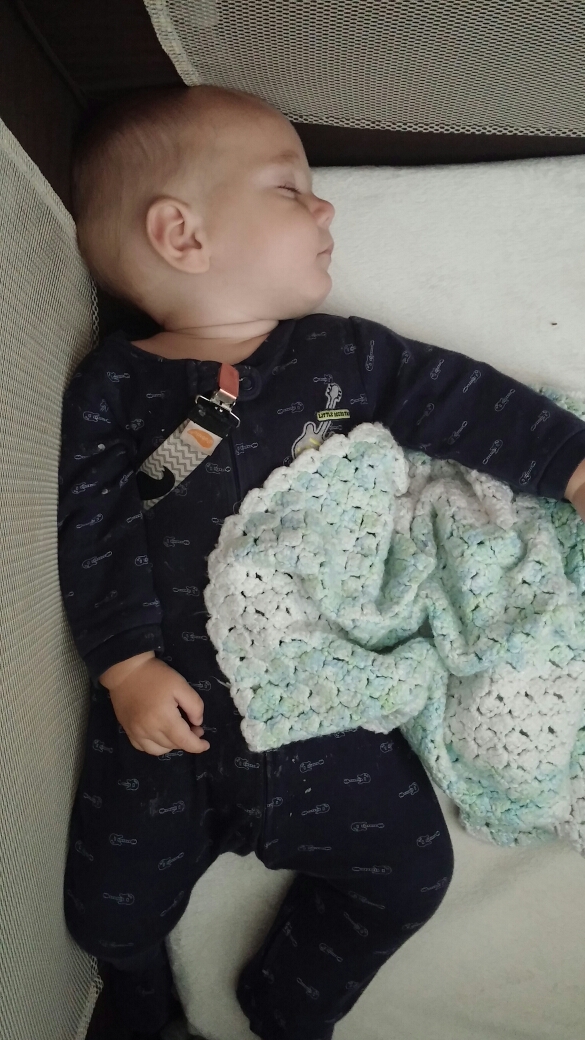 Just after the pictures were taken, I climbed into the shower with my tired, stinky self and 3 minutes in, the little guy woke up. So there ya have it. Super mom has been defeated.

Maybe the reset button will appear tonight somewhere. I know some day I will ache for these days again. In the meantime, here’s to motherhood.